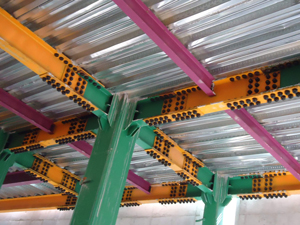 One of the most important reasons for using bolted connections (bolted metal connections) in industrialized countries is no need for welding, the time of installation of the structure in hard situations and the speed of execution at the installation site compared to the welded structures. Also, frame skeletons which are constructed in the construction site are due to the limited availability of sufficient electricity and the use of modern welding machines (with a high and standard penetration rate), the lack of heavy industrial tool, experienced teams, correct coloring and de-rusting, etc. Not only they are lack of quality, they are quite cumbersome and have time-consuming processes that unknowingly lead to traffic jams in the passages and disturbance of neighbors. 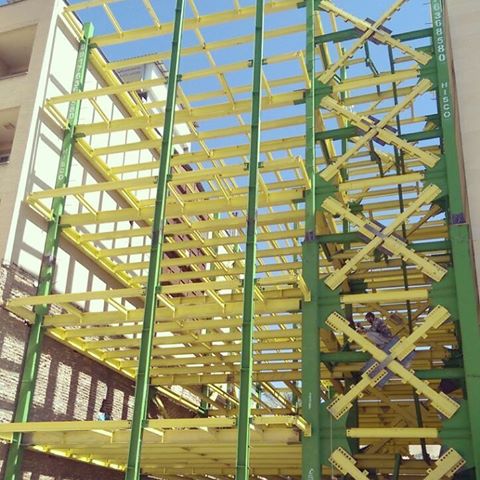 Lower Cost: The construction of bolted building can economically have less cost to the owner, but this does not mean that in the two structures which have the same sections bolted structure is less costly. But due According to the designer’s openness in optimizing and constructing sections of less weight, it is possible to easily reduce the weight of the structure by the designer.

Possibility to open the structure and reuse: members of steel structures that are connected together with the bolt can be separated and at another location re-connected to each other and construct a new structure. This issue is of particular importance in the implementation of temporary structures such as bridges and temporary scaffolds.

comparable to the structures of the welds structures that are constructed at the installation site.

Wasted Materials: In buildings with bolted metal structures there is possibility of implement and produce lighter sections and more resistance, and the use of sheets in the construction of sections and wasted iron will be minimized.

Safety and structural stability: both theoretically and practically, it has been proven that the bolted buildings because of better quality have more stability and resistance to earthquake and lateral forces.

Fire resistance: At high temperatures, the bolted metal structure is more resistant to heat and probability that the structure becomes degraded is less than weld joints.

No need for work space: Usually in cities due to the lack of a suitable place for construction, most contractors are often bothered.

Universal Extension: In all American and Europe countries, all structures are executed in bolts, except in very non significant structures that their joints are welding. One of the most important reasons for using these types of structures in these countries is its better performance and the more experience of those countries in the construction of steel structures.

Working environment conditions: For proper execution of the welding joints, the ambient temperature, air conditioning, location, and the connection area shall be acceptable and in the proper conditions. While the restrictions mentioned in the implementation of steel structures with the help of bolted joints are far less. The major problem in the execution of bolted joints steel structures is due to the incorrect and inappropriate application of holes and the non-observance of prestressing in screws and their non-compliance during execution and installation. Therefore, in installing the holes in the metal workshops, the precision of the location of the holes should be determined and the perforation of the members should be done with the appropriate equipment.

Ability to use in disaster management: Due to the possibility of displacement of such structures, it is possible to move and install it in crisis areas such as floods and earthquakes.

, frame skeletons which are constructed in the construction site are due to the limited availability of sufficient electricity and the use of modern welding machines (with a high and standard penetration rate), the lack of heavy industrial tool, experienced teams, correct coloring and de-rusting, etc. Not only they are lack of quality, they are quite cumbersome and have time-consuming processes that unknowingly lead to traffic jams in the passages and disturbance of neighbors. The traditional method of frame skeletons construction on site in terms of attachment and construction in addition to mentioned items has a high cost of crane.

Due to the earthquake of our country and the disastrous events that have taken place in Bam and Kermanshah in recent years, a new approach to industrial production and standard structural skeletons has emerged, as these types of buildings are designed with a special and modern and industrial design, have a great resistance to traditional skeletons. Another economic point is the lower cost of manufacturing and installing than the usual overall method, which is significant in times of shortage of supply and increase in the price of ironmonger. Due to the design scope of the prefabricated sheets and structures, calculations, spacing and loading are also performed with high operating freedoms.

The durability of the connections depends on the degree of corrosion of the environment during service. Rust induced breakdowns cause premature failure, so corrosion protection should be considered in order to maintain the entirety and integrity of the structure during its lifetime. Bolts in steel structures are one of the important components that the integrity of the entire structure depend on them. To protect against corrosion, you can use resistant metals or protective coatings before and after installation. The use of joints made of resistant alloys is the best solution in extremely corrosive environments. Protective coatings include zinc, cadmium and precious metals such as nickel and tin, which must be used before installation. In the case of more active metals such as zinc and cadmium, coating thickness is important, but thin coatings of nickel and tin can protect the structure well in the long run.